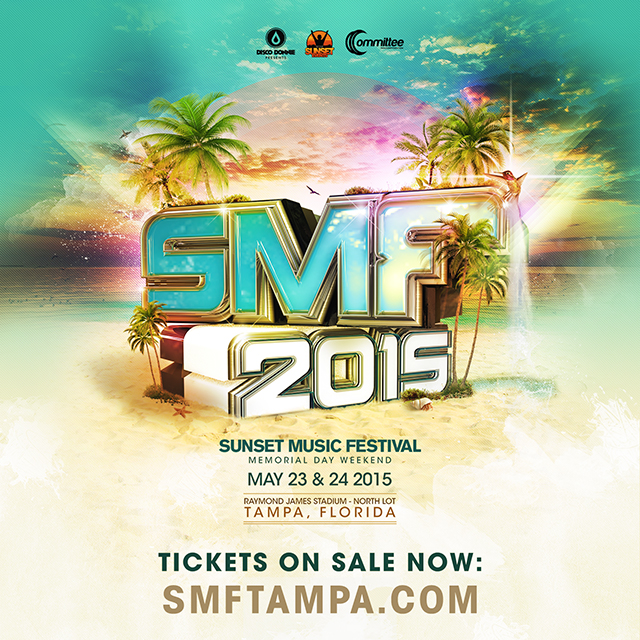 Sunset Music Festival is making its return to Tampa, FL this Memorial Day Weekend 2015. We’ll be teaming up with Disco Donnie Presents and Committee Entertainment at Tampa’s Raymond James Stadium (North Lot) to celebrate the national holiday with thousands of your beautiful smiling faces!

Over the years, you’ve come to expect a stacked lineup with top-notch artists and massive visual production. As we unite for our fourth year, you can still expect all of that and more as we deliver another year full of music, fun and memories.

While the lineup has yet to be announced, if the past years are any indication, the upcoming edition is set to be bigger and better than ever! Be sure to secure your tickets early to lock in the lowest prices as tiers will sell out as the event gets closer.

In 2015 we will also be taking a step into the future as the first completely cashless SMF! Instead of releasing paper or digital tickets, this year you’ll receive your official festival wristband prior to the event via USPS mail. Activate your wristband online beforehand to make entry into the festival easier. Not only will you enjoy shorter lines getting into the festival, but you’ll even be able to use your credit card to load it with funds and utilize “Tap-and-Go” technology to pay for your drinks, merchandise, food and much more on-site – this means, less waiting around; and more time dancing!

We’re really looking forward to Sunset Music Festival 2015 – and we hope you are too!