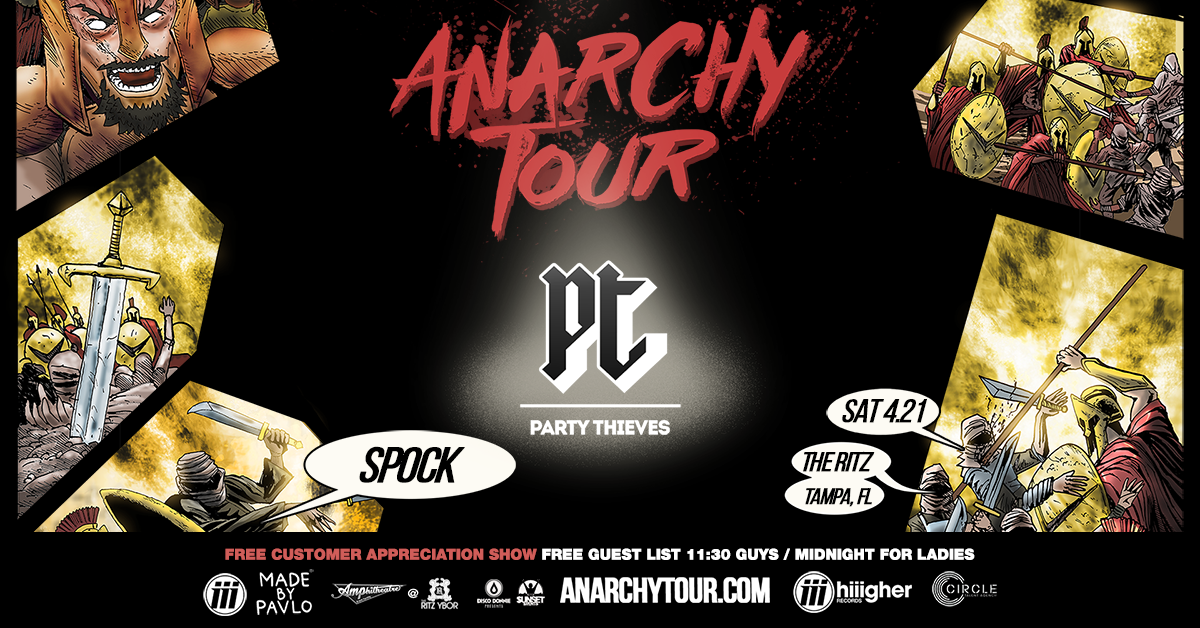 By Andrew FaraoneFebruary 8, 2018No Comments

Party Thieves’ latest ‘Anarchy’ EP release was nothing short of a wild success. With hundreds of thousands of streams across various platforms, incredible artist support and even better feedback from his fans, Party Thieves’ Theft Army has grown exponentially since the release of the EP. However, an EP just wasn’t enough. Party Thieves and his team decided that the Anarchy EP deserved to be brought onto a global scale and so Party Thieves is pleased to announce his Anarchy tour. Hitting Australia, North America, Europe and Asia, Party Thieves is going above and beyond for this tour to bring his music to every corner of the world.

With tens of millions of streams on everything from originals to remixes, and an unique background which includes stints as a West Point cadet and a wide receiver for the Army football team, NYC-based solo artist Party Thieves has swiftly made his presence known in the music world. His ability to be able to take any track or idea and make it his own has been recognized by renowned names like RL Grime, Skrillex and Diplo. Producing for years now, Party Thieves is known for his bassbin-rattling hits, ‘Origin’ and ‘Poppy Seeds’, both tracks expressing his unique style from the moment the vocals hit in a rush of adrenaline and endorphins, combining hard hitting trap elements and with a deep musicality. Party Thieves has also inspired a movement called the Theft Army; an army hungry for the incredible music he consistently puts out. Going beyond just the music though, Party Thieves uses his platform and following to make a bigger difference within communities. Often, a percentage of his merchandise sales are allocated to aid various organizations and causes like the Anti-Gun Violence campaign. Being able to unite his passion for music with his philanthropic values, the Theft Army movement goes beyond celebrating a killer track or party. Party Thieves has created a movement to help change the world for the better, one song at a time.

Grab your spot on the FREE customer appreciation guest list for this tour as it takes over Tampa Bay on Saturday, April 21, 2018 at The RITZ Ybor for a special edition of AMP!D Saturdays. Don’t miss the party – start making plans with your crew to hit up the Anarchy Tour in April!

Early fulfillment for #SMF2022 wristband orders begins tomorrow afternoon at 12 PM at @theritzybor 🤩 Bring your ID with you and avoid the lines at the festival! 🧡 http://smftampa.com/wristbands

Close out your Friday night at #SMF2022 with the Official Afterparty at @theritzybor featuring @Malaamusic 🔥 http://hive.co/l/malaa0527