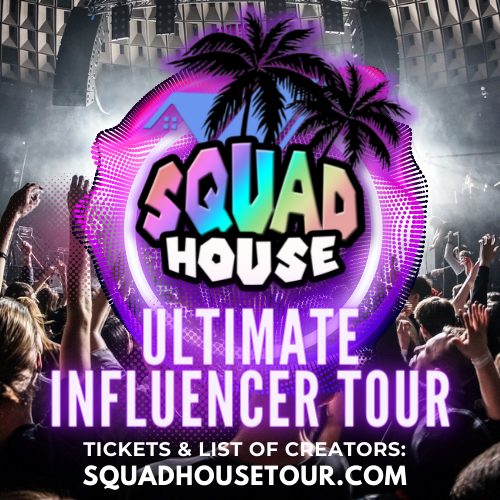 July 9, 2022 | The RITZ Ybor | Tampa, FL | 4:00 pm - 10:00 pm
Buy TicketsRSVP on Facebook
Squad House – Ultimate Influencer Tour will travel across America with a unique and exciting event, with some of the most exciting TikTok influencers and entertainers. Fans of TikTok will be able to meet, interact, learn from, and be entertained by TikTok influencers.

VIP tickets will allow fans to meet and interact with the influencers in the afternoon and take photos, make TikToks, learn how to build their own TikTok channels, and have access to all the influencers in a family-friendly and fun environment. VIP Tickets include all access to all VIP events, including admission to the concert. Doors for VIP ticket holders open at 4 pm. In the evening, there will be a concert with influencers singing, performing, dancing, and interacting with the fans in a unique and exciting way! GA Tickets include Concert Only. GA admission starts at 7 pm. Concert – 8 pm.TikTok is the biggest and most diverse social media platform for all ages, and this tour will capture the essence of TikTok! For a list of all the influencers on the tour, go to www.SquadHouseOfficial.com

– MAKE TIKTOKS
– GET EXCLUSIVE MERCH!
– LEARN FROM THE INFLUENCERS
– TAKE PHOTOS
– GO LIVE ON TIKTOK WITH THE INFLUENCERS.
– MEET/GREETS
– AND MUCH MORE….

For a list of all the influencers on the tour, go to www.SquadHouseOfficial.com

Early fulfillment for #SMF2022 wristband orders begins tomorrow afternoon at 12 PM at @theritzybor 🤩 Bring your ID with you and avoid the lines at the festival! 🧡 http://smftampa.com/wristbands

Close out your Friday night at #SMF2022 with the Official Afterparty at @theritzybor featuring @Malaamusic 🔥 http://hive.co/l/malaa0527