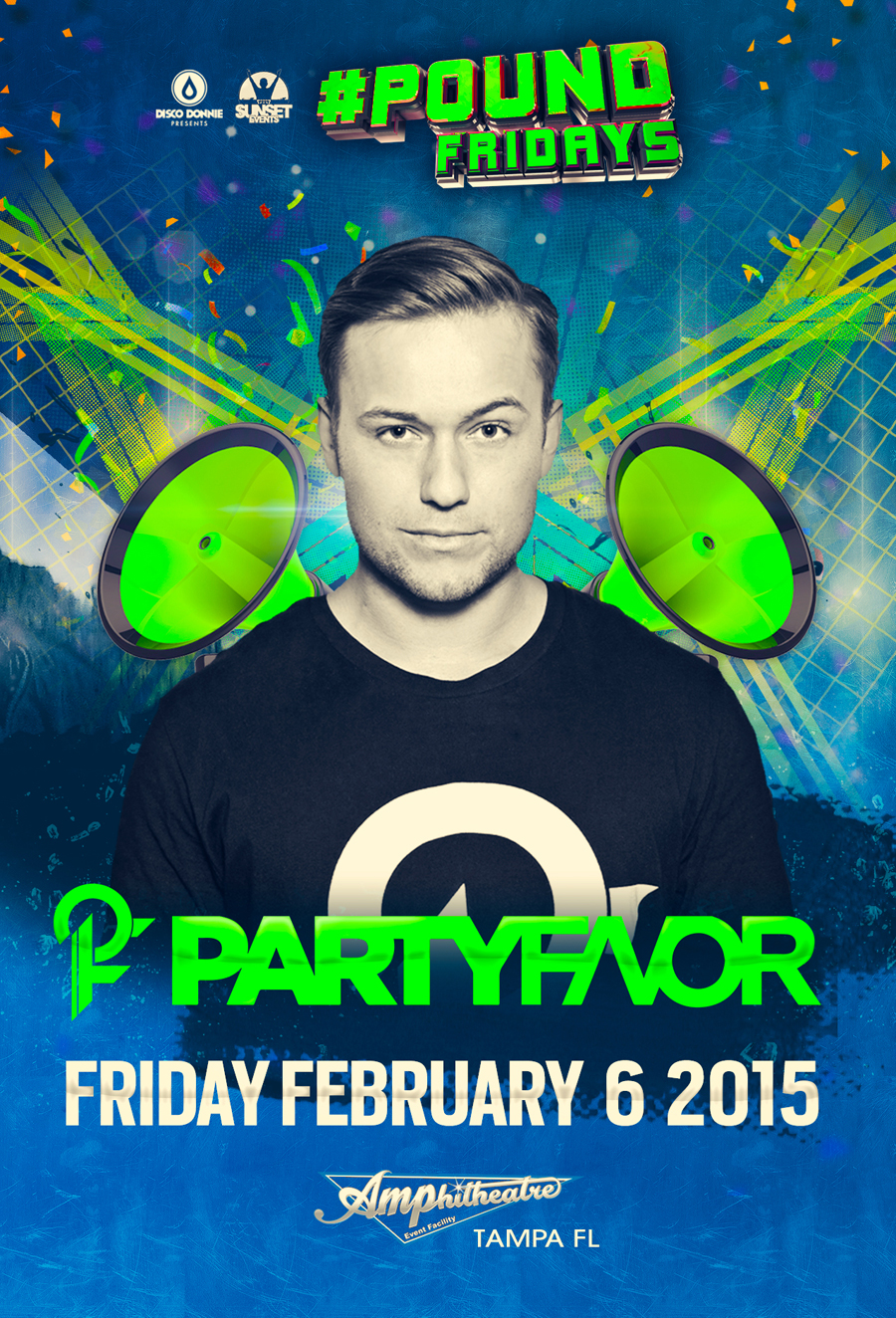 On Friday, February 6th a taste of Mad Decent comes to #Pound Fridays as we bring you Party Favor!

Few acts posses the innovative character and diverse repertoire of Los Angeles’ fastest rising name in bass. Dylan Ragland took the name Party Favor in 2011 to bring a series of unexpected influences to electronic music. The result: an effort that helped to pioneer the festival trap genre, turn heads across the globe and land him a spot on Bombsquad Records where his debut EP charted instantly on Beatport. His first single “Meow” went on to land a Top 10 spot as well just months later. Now he jumps between groundbreaking collaborations twisting genre and creating ingenious original records like “Bap U” from Mad Decent, and more.

Taking to station’s like Power 106 to record mixes, and new stages put on by Insomniac, Disco Donnie Presents, and SFX to perform, he finds his platforms getting larger each month. Now, with official work on Spinnin Records, Ultra and Mad Decent, Party Favor offers his music to social numbers well over 120,000 – a Facebook audience which only seems to expand daily. Party Favor’s music continues to reel in millions of plays and gain support in iconic sets such as Jack U’s debut at Ultra Music Festival, and others across the globe.

With the recent release of Myself In The Way, dreampop collective @turnoverva will float into town in 3 weeks. 🥰 #turnover #theritzybor
http://bit.ly/turnover1213

TOMORROW 💥 Enjoy a night with @DJPAULKOM of the infamous Three 6 Mafia at @theritzybor for a special edition of #MischiefMondays 😈 https://bit.ly/djpaul1128

#ICYMI... @TrivectaMusic brings round 2 of his Way Back Up Album Tour to @theritzybor in January with support from @farout_official 🙌 Secure your tickets online now! https://bit.ly/trivecta0127

Break out your dancing shoes, doors open at 10 PM

Come get you some Blue Collar Bass with @musicbytv

We're jumping into our weekend with @youasidepiece

The decks are stacked tonight for @musicbytvboo's

Grab 20% off on select shows at @theritzybor with

We are stoked to host the return of @midnight_tyra

Next Saturday we've got a lively double-header for

We've got a stacked #BlackFriday lineup with @musi

Grab your tickets for Femmes & Follies' next perfo

Grab your tickets for @goodiemob on December 17th

On Saturday night we're getting to Second Base wit

The face you make when you realize @musicbytvboo i

Next Month, @RiotTenMusic brings his HYPE OR DIE T